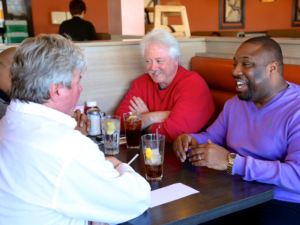 Born and raised in the Point Breeze section of the city, Kenyatta’s commitment to fighting for our neighborhoods and our neighbors goes far beyond city council, for him it’s personal.  He is driven to give back to the communities that helped raise him.

“I grew up in the Second District,” said Johnson.  “The people and communities in those neighborhoods helped make me the person I am today.  That’s why I feel so strongly about serving the district and giving something back.  I want to make sure everyone shares equally in the opportunities we’re creating in this city, and I want to make sure we’re giving the next generation of Philadelphians a chance to succeed and make positive, healthy choices.”

After the devastating murder of his cousin in 1998 he felt compelled to get involved and get active.  He founded an organization called Peace Not Guns that continues to this day to focus on ending the rampant gun violence in the city and provides young people with alternatives to violence.

Prior to serving on the Philadelphia City Council, Kenyatta was a state representative for the 186th Legislative District.  He also worked as a Pennsylvania State Senate staffer and was a volunteer for AmeriCorps, the national service organization that allows citizens to serve their communities. He was also a founding staff member of City Year, the non-profit AmeriCorps organization whose primary goal is to build advocacy through service.

Kenyatta and his wife Dawn live in Point Breeze with their sons and their dog, Sasha Blu.

I'm proud to have earned the endorsement of the Philadelphia Inquirer. It's a recognition of the work we're doing to serve everyone in the Second District. I'll keep working to earn your support every day. https://t.co/SaoI3Ehp1b
View on Twitter

For Kenyatta Johnson, the issues of poverty and gun violence aren't about politics, they're personal. He's fighting for us in city hall so that Philadelphia families no longer feel the pain of gun violence. Kenyatta Johnson: From Here, For Here. https://t.co/aikt4cDqZ3
View on Twitter
0
1

My wonderful supporter Judy Romano from Friends of Fitler Square . Thanks so much for your support lets continue to make the 2nd District a great place to live for everyone. #kenyattajohnsonforcitycouncil https://t.co/RYgXxuGsFT
View on Twitter
0
1

What a amazing Meet & Greet hosted by Judy Romano from Friends of Fitler Square and Chris Lin 8th Ward Committee Person at D' Angelos. Thanks so much for your support lets continue to make the 2nd District a great place to live for everyone. https://t.co/orbc5GkNWr
View on Twitter